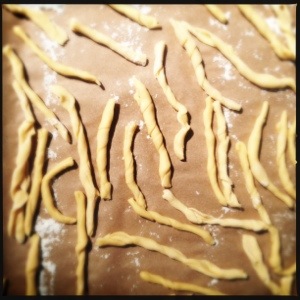 “Strozzapreti (“prieststranglers” or “priestchokers” in Italian) are an elongated form of cavatelli, or hand-rolled pasta typical of the Emilia-Romagna, Tuscany and Umbria regions of Italy as well as in the state of San Marino. The name is also used for a baked cheese and vegetable dumpling.

There are several legends to explain the name.

One is that gluttonous priests were so enthralled by the savory pasta that they ate too quickly and choked themselves, sometimes to death. Another explanation involves the “azdora” (“housewife” in the Romagna’s dialect), who “chokes” the dough strips to make the strozzapreti: “… in that particular moment you would presume that the azdora would express such a rage (perhaps triggered by the misery and difficulties of her life) to be able to strangle a priest!” Another legend goes that wives would customarily make the pasta for churchmen as partial payment for land rents (In Romagna, the Catholic Church had extensive land properties rented to farmers), and their husbands would be angered enough by the venal priests eating their wives’ food to wish the priests would choke as they stuffed their mouth with it. The name surely reflects the diffuse anticlericalism of the people of Romagna and Tuscany.”